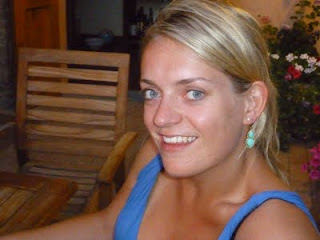 Join me, the readers and other Harlequin Presents writers on a fascinating discussion about heroes and heroines....  You can find us at: http://www.iheartpresents.com/
And here is a photo of the lovely Celia.
Posted by Sharon Kendrick at 13:25 1 comment:

THE MEMORY COLLECTOR by Meg Gardiner 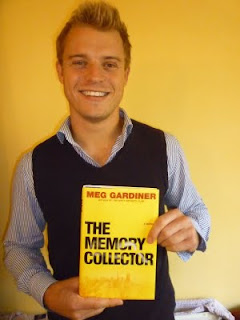 Here is my son Patrick, holding a copy of Meg Gardiner's latest unputdownable novel.  See how well it's custard-coloured cover co-ordinates with my wall!
The story features Jo Beckett - a forensic psychiatrist who calls herself a "deadshrinker" instead of a headshrinker.  I'm shivering already. And it has the best first paragraph I've read in a long time.
Let me tell you a bit about Meg.  We first met through Paul (aka The Husband) in whose choir I happened to be singing at the time.  Paul, as well as being a fabulous cook and a mean guitarist - pulls no punches when it comes to assessing quality.
Me:  "Gosh, I sounded really flat then, didn't I?"
Paul: "Yup."
He introduced me to his wife, who I liked instantly.  Funny.  Clever.  Irreverent. Nice kids.  But that's enough about me....
Seriously, Meg showed me her writing and I was blown away by her talent.  Along with the much-missed Giles Gordon - I joined what was to become a long line of literary admirers and her subsequent success is hugely deserved.  She recently won a prestigious Edgar award for her first novel, CHINA LAKE - along with a whole heap of other professional plaudits.  THE DIRTY SECRETS CLUB won the 2008 Romantic Times Reviewers Choice Award for Best Procedural Novel.
So, if you haven't read any of her gallopingly-good stories - then what are you waiting for?
Posted by Sharon Kendrick at 17:48 No comments:

Cheltenham!
Doesn't it look lusciously-English with such a stately town hall and picture-perfect race-course?  It's where all kinds of literarti will be gathering for next month's famous festival.  Here you'll find an eclectic mix of fascinating speakers, including.....me!
Hope to see you there - book your ticket now - and here's the link:  http://cheltenhamfestivals.com/literature-2009/stella-duffy-katie-fforde-sharon-kendrick-and-virginia-mckenna-literary-heroes/
Posted by Sharon Kendrick at 08:32 No comments: 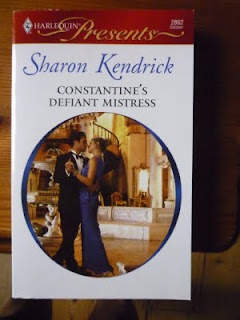 Of CONSTANTINE'S DEFIANT MISTRESS.
I'm delighted to have managed to photograph it and then to have downloaded it onto this blog (a technological breakthrough for someone who bemoaned the general passing of lovely single lens reflex cameras.....).
And since this blog has been rather haphazard (like life) - I  am determined to add to it a little more frequently. Coming soon are:
1.  Magnificent photos of Cornwall taken outside Judy and Rob's house.
2.  An opportunity to see the gleaming custard-coloured cover of THE MEMORY COLLECTOR - the latest fabulous crime novel from Meg Gardiner.
Posted by Sharon Kendrick at 11:04 2 comments: