While visiting the vivacious author and film person Abby Green in Dublin recently - we went to the most amazing restaurant, though I can't actually remember what it was called.  All I do know is that it was achingly trendy and apparently frequented by film-stars (though there weren't any on the day we were there)  *assumes sad face, a la Sally Bercow on being sued for being a twit on Twitter*
And who needs film stars when the food was so damned good?
Here is my massive duck egg starter: 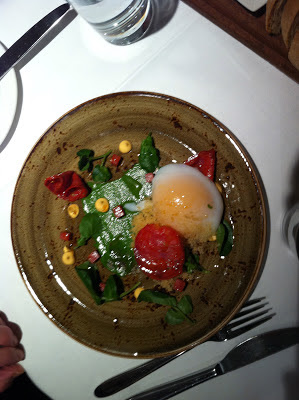 And even though this would have been a perfectly adequate meal if I'd been eating lunch at home, I quickly followed it up with this equally massive chunk of hake sitting on slithers of courgette - which were meant to look like one of those pasta *substitutes* you find in weight loss articles (as if there could ever be any real substitute for pasta!) 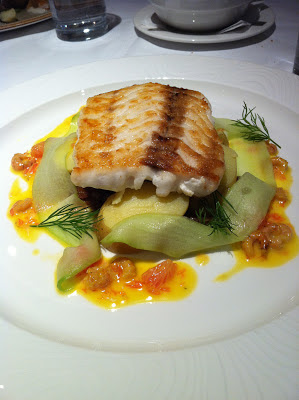 And even though by now I was feeling almost completely stuffed - how could I possibly have resisted a pudding which looked like this? 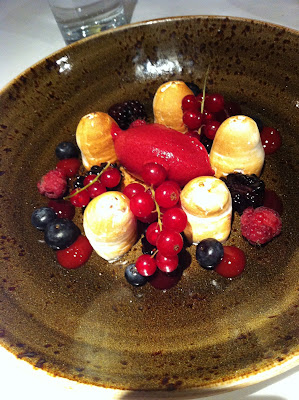 Those protuberances which resemble pale yellow toadstools, were actually made of soft, chocolatey meringue which contrasted with the sharp tang of the cherry sorbet and the juicy slurp of the berries, and the whole combination tasted completely ambrosial.
In fact, this pudding really deserves a name, if only I could think of one....