I've just returned from a trip to the Far East and this moment was captured in Hanoi, at the Temple of Literature. I love this photo - mainly because I didn't know it was being taken - but it reminds me of the sense of awe I felt as I looked around. 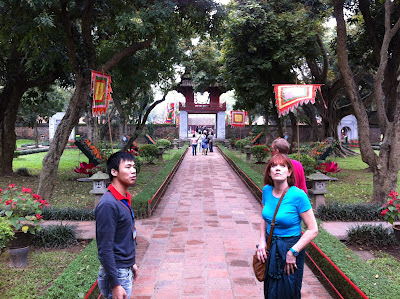 It was a very beautiful and serene place. The Vietnamese really value education. They also wish people to show respect in their sacred pagodas, which is why I had to wrap a shawl around me as a makeshift ankle-length skirt.
With me is our guide, Jena (I've probably spelt that wrong) who regaled us with stories of how buffalo still pull carts in his village and how much he enjoys cobra blood, when drunk with alcohol. Mmm!
Afterwards, we went to see the embalmed body of Ho Chi Min, which was quite an experience. When I'm not so jet-lagged, I'll tell you about it.
Have you ever been to Vietnam, or is there a similarly unforgettable place that you've visited?
Posted by Sharon Kendrick at 19:30 4 comments:

SIZZLING HOT DOWN UNDER

I'm loving this Autralian cover of my book THE SHEIKH'S UNDOING, which arrived yesterday morning along with Japanese, Italian and French translations. It's always a treat when foreign editions tumble through the letter box. It makes me realise how truly global romance is....because everyone loves a love story. 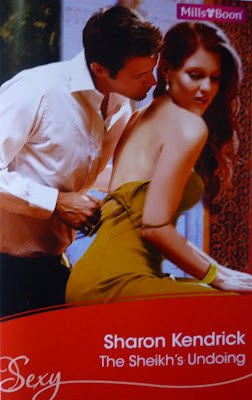 I've been frantically busy on my latest manuscript which features a woman called Roxy Carmichael, who used to be famous - but not any more. One time girl-band member Roxy has fallen on hard times. She's bruised and disillusioned - though her talent and her ambition haven't withered one bit.
Rosy is a survivor who's used to standing on her own two feet and the last person she wants to accept help from is the sexy and powerful Duke of Torchester.
But as we all know, you can't always get what you want....
Other than that, I went to the Romantic Novelists' Association's fantastic awards ceremony, in the Gladstone Library in London. (I have a very soft spot for Gladstone).
I also saw SHE STOOPS TO CONQUER at the National Theatre, which was first performed in 1773. It was a brilliant performance - but the most startling thing of all was the freshness of the dialogue, which could have been written yesterday.
Because that's the thing about human nature....times change, but people don't.
Posted by Sharon Kendrick at 08:03 8 comments: