THE LUXURY OF WARMTH

How fortunate we are not to have to live in a cave. Seriously. Imagine how grim it must have been for our ancestors ..... I bet they didn't sit around wondering whether or not they were fulfilled!

I realised how much I take simple warmth for granted when my boiler broke down just after Christmas (naturally) and the atmosphere in the house plummeted to an igloo-like temperature. It was back to donning thick, unflattering polo-necks (designed to draw attention to festive excess around the chin region) and to leaping out of bed in the morning and having to move fast to stop yourself turning into one of those ice-statues which abounded in Narnia when the White Witch waved her accursed wand.

So here's a photo of my friend Tom (in Santa red) who is currently on a plane taking him to the warmer climes of Sydney. Lucky Tom. With him is Tim - and they helped liven up the Kendrick Christmas - even as the heat began to bleed from the house and we clustered desperately around the log fire. 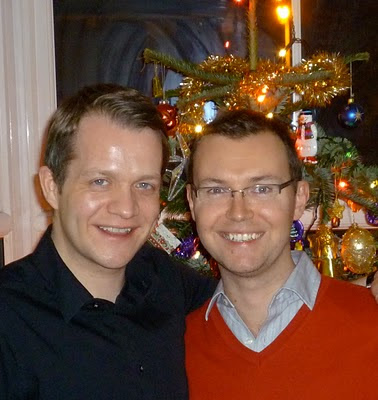 Today I've been making a wedding cake for my school-friend, Heather and I have been a tad ambitious. Still, I think it works. The wedding is tomorrow - and I'll post a photo of it. For now, the design is secret......
Posted by Sharon Kendrick at 11:53 4 comments:

Unlike my mother and all her brothers and sisters who grew up in rural Ireland and used to have to kill their own dinner - goose is not the number one choice of Christmas meal for most people. But I've always liked them. Like my heroes, they're rich, different - and extremely tasty. (And I like to eat food that you can never buy in restaurants).

So here's my post-Yule offering. A delicious bird, dripping with amazing fat which went on to provide the most sublime roast potatoes ever. It was so good that eight of us gobbled the whole thing down in one sitting! 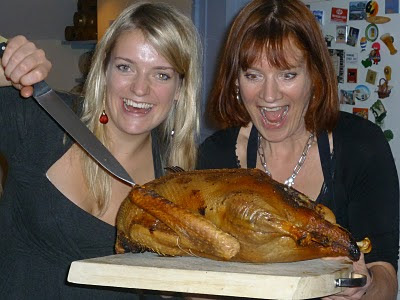 I had a great time - lots of parties, lovely people and presents - how about you?
Posted by Sharon Kendrick at 14:24 2 comments:

To all the kind people who have asked - my son is on the mend, the black ice on the pavement has melted, trains are running again and my daughter is on one of them, the goose is ready to be cooked and all is at peace with my world. I hope that yours is filled with peace, too. So ignore the culinary demands and the pointless worry about things you haven't done - instead take time to sit back and count all your blessings. Tonight I shall listen to the bells ringing out over the city and remind myself that life is very short, and very precious. 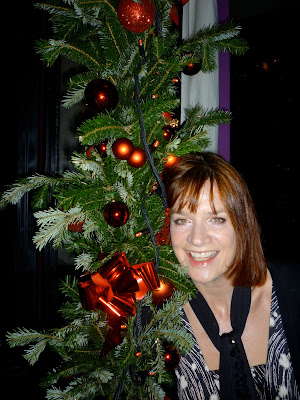 I wish you all a very happy holiday - however you choose to celebrate. I'll be eating (far too much!) at a big family gathering and then having friends come by on different days. What will you be doing?
Posted by Sharon Kendrick at 12:44 3 comments:

But sadly, I've missed out on a great deal of partying (including the fabulous Shreve Family Singalong) because my son has been in hospital with a horrible Quinzy. This isn't an old-fashioned variety of apple but a ghastly peri-tonsillar abcess which involved him arriving home from Avignon and being whisked straight into Southampton General to be pumped full of antibiotics. A big thank you to our wonderful health service - which comes in for so much flak from the media.
Thankfully, he's now home and on the mend - though my nursing skills are so rusty that I can't seem to pop a painkiller from the pack without breaking it in half.
And the weather is so icy that I feel like Jayne Torville every time I set foot outside my door.


Here's a shot of the back garden. 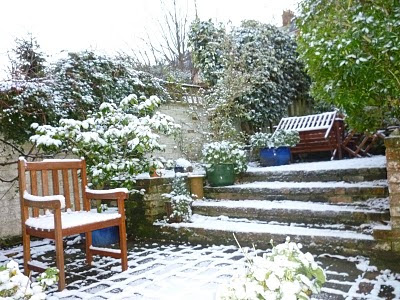 Okay, pretend you're ill and want cheering up.....what would do it for you?
Posted by Sharon Kendrick at 12:32 6 comments:

In the general euphoria of having delivered a manuscript that I had been working at for all hours of the day and night (or so it seemed, during those emotional last few scenes) - I haven't posted for a few days. But now I"m back! Feverishly running around and buying things like clumps of cinnamon and sweet oranges and lighting incense which smells like a winter forest. I love Christmas. Flickering candles. The heart-piercing song of the chorister. And of course, chocolate.....


In the past month I've been to Umbria, Cornwall, Avignon and Paris - and here's a photo of my daughter and son, in beautiful Avignon. 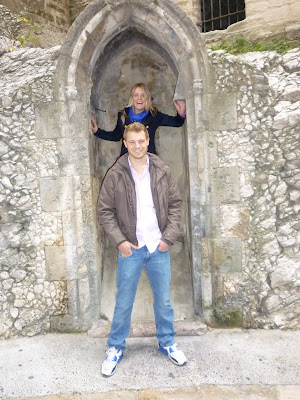 And one of my latest book - which is out in north America now. 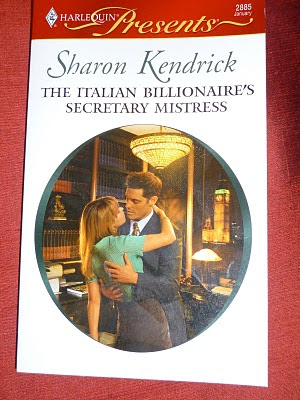 If I could have one wish prior to Christmas, it would be to go to Lapland and ride in a sleigh jingling with bells to see the Northern lights.
What would be your wish?
Posted by Sharon Kendrick at 15:46 5 comments:

Last night I went to an amazing ball in aid of Save The Children. Presided over by the Princess Royal, it took place in the magnificent National History Museum - which was lit up like a Disney castle. 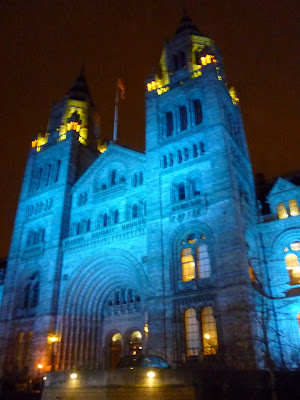 Against a backdrop of stars (pretend ones) and surrounded by glittering Christmas trees, we dined on duck and dark chocolate. And it's so nice to be able to get to wear velvet, bling and maribou feathers! 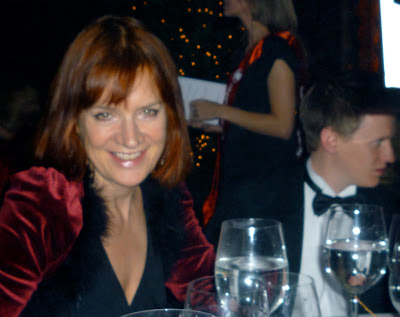 We sat beneath the giant bones of an ancient dinosaur, which dominates the main hall. The light was strong which means that my picture isn't brilliant - but this may give you some idea. It does seem strange to think that this mighty creature which once roamed the earth, should end up being bathed in Barbie-pink light and towering over dining tables....thank goodness dinosaurs couldn't see into the future (or maybe they could - maybe even now there is a secret band of them, plotting their revenge and return!) 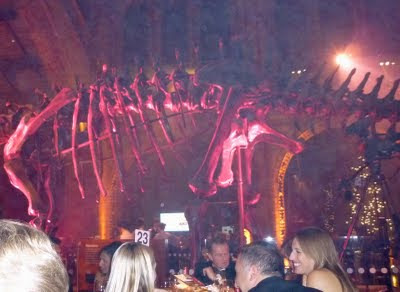 The auction went on for so long that I was forced to miss Bryan Ferry, who was doing a few songs. Well, I had an early start and an urgent deadline and I'm not a particular fan of a man who many consider to be an aging roue. Now if it had been the Rolling Stones it would have been different.
Who would YOU miss the last train for?
Posted by Sharon Kendrick at 09:51 5 comments:

Back from an inspirational weekend in Paris and trying like mad to finish my book which is all about a man who hates Christmas and a woman who should never have become his mistress.....
(Note the padlocks which countless lovers have attached to this bridge - leaving their love-locked hearts forever in this romantic city).
But why am I staring at the ground? 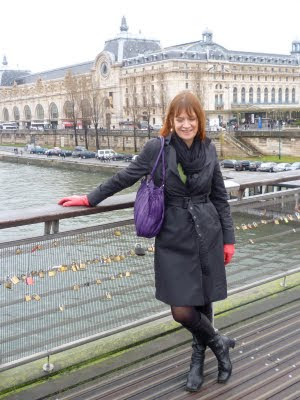 Because moments before, a smiling person had "found" a gold ring - it's a famous Paris scam. You are shown the ring and you buy it for a ridiculously bargain price and there is talk of luck and a suggestion of magic.
No, we didn't fall for it - we were too busy trying to find oysters for lunch!


And here's a photo of Christophe and Arnaud - who made me laugh so much over dinner. 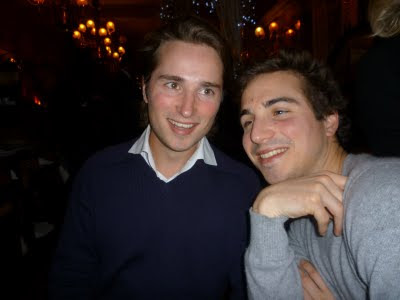 Would anyone care to name two dinner party guests who will appear in my latest book? The scene is in a beautiful London town-house. The heroine has never met any of the (Italian) hero's fancy friends before - and is insisting on throwing a dinner party for them. There will be tears before bed-time.... but be quick - I'm delivering the book at the end of the week.
Posted by Sharon Kendrick at 08:16 4 comments:

On Monday I was in Paris with my daughter and ate Bouillabaisse at the Terminus Nord - a wonderful restaurant which is situated bang opposite the Gard du Nord. It's an unexpected setting for a reliably good place to eat - a classic French bistro serving exemplary food. Try it. And here is something to whet your taste-buds.... 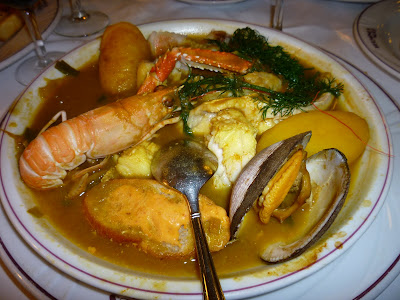 This afternoon, I'm off to Paris again. It's research - OF COURSE!
And in the meantime - what's your own particular dream dinner?
Posted by Sharon Kendrick at 13:44 2 comments:

So this was Cornwall. Unlike the cerulean skies and golden dappled paths which featured in my last trip, this time it was all windswept and rainswept - with winds which howled at night like caged beasts. But oh, so atmospheric. Particularly when I looked out of my window first thing - to see apricot-tinged waves sparkling in the early morning light.
Here's a glamour shot while out walking! 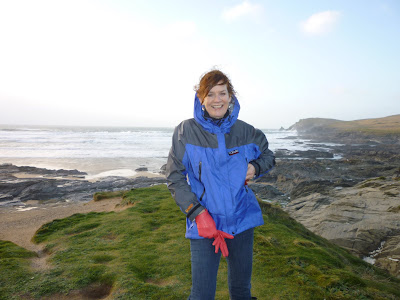 And my friend Catriona's unique use of a paper back to help shelter her from the driving rain! 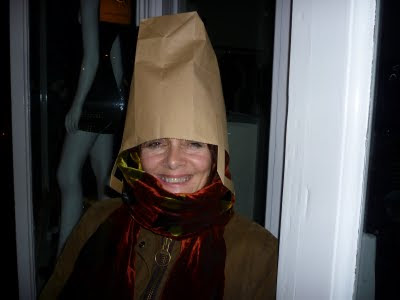 And the cutest little lamb you ever did see. This part of Cornwall has so mild a climate that lambs are always born before Christmas. And this one bleated so sweetly that we all began reciting nursery rhymes and deciding that mint sauce should definitely be banned 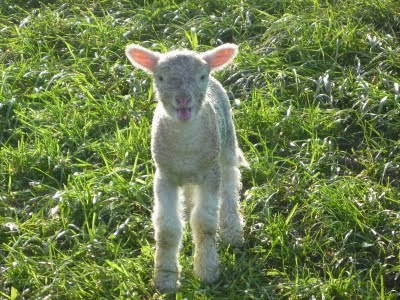 What shall we call the little lamb?
Posted by Sharon Kendrick at 14:00 6 comments:

THE WORLD IN MINIATURE

Back from Cornwall (WINDY!) and Avignon (TALL BUILDINGS) with lots of lovely photos but no battery. So - while I'm powering up the camera and tackling the book which is due very, very soon - I'll show you a figurine crafted by Kate Evans, who is enormously talented. 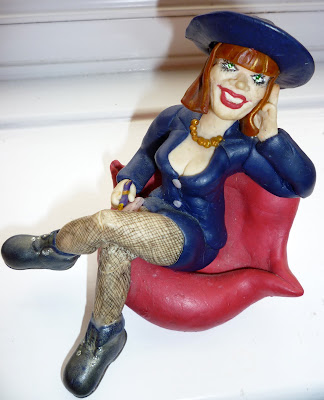 It's supposed to be me! She made it from Fimo modelling dough and then baked it in the oven. See how she cleverly replicated the amber beads which I used to wear ALL the time (and still love) and the Doc Martin boots (which have long gone).
The world of miniature fascinates me - hence my devotion to naff fridge magnets and toy-towns.
What fascinates you?
Posted by Sharon Kendrick at 13:52 2 comments: