It's 2pm and I'm still wearing last night's make-up and the jeans I threw on first this morning.
Is this sloth, I hear you ask yourself?
Well partly, yes - but in main because the proofs I started correcting seemed to take for-evah! And last week I was slaving away doing revisions for THE SHEIKH'S UNDOING, which will be out early in 2012.
So much of this job takes place in the imagination that I sometimes have to remind myself that it does have a glamorous, real-life side to it.
And to help relive a bit of the glamour - here's a photo taken earlier this month outside the New York Plaza with three amazing fellow Harlequin authors.
On my left is Caitlin Crews - who grew up in New York and now lives in LA. Next to her is Carol Marinelli, originally from England but who now lives in Oz. And on the right is the irrepressible Abby Green, who hails from Dublin. All of them funny, irreverent and supremely talented. A cosmopolitan little bunch, aren't we? 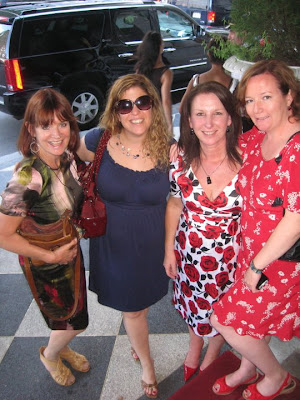 The setting was wonderful - but mainly it was the opportunity to get together with my fellow authors which was so life-affirming. A real perk of a job which by nature is very isolated.
So what would you consider to be a perk of your job?
Posted by Sharon Kendrick at 13:54 7 comments:

where you'll find a short-story called BROKEN TRUST, which I wrote specially for the magazine - and where you can also download one of my books for FREE! 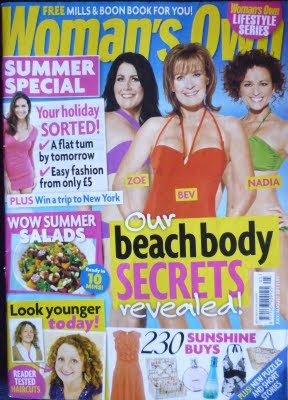 The WO team produced a wonderful set of photos to accompany the story - including one of the hero staring broodingly out of the window, which was exactly as I had pictured it in my mind. (Note to editor - do you think he/she could do one of my book covers?!) 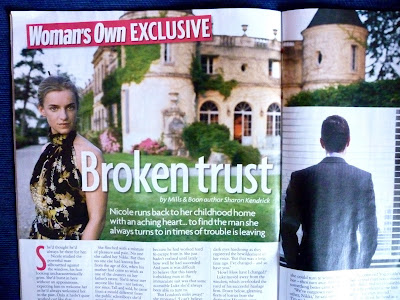 It was stepping out of my normal comfort zone to produce a complete story in 1.500 words, instead of 50,000 - but there's nothing I like more than a challenge!
And since my latest book is proving something of a challenge - please inspire me by telling me if you've tried something different recently....
Posted by Sharon Kendrick at 08:28 14 comments:

TEA AT THE PLAZA, NYC

We Presents authors enjoyed the most sumptuous tea at the Plaza Hotel in New York, courtesy of the lovely Jane Porter.
This was a huge thrill for me - not just because the food was so sublime or the decor so amazing - but because one of my favourite films was set here. (And Home Alone 2 is still a must-see for me every Christmas!)
Here I am pictured with Caitlin Crews (centre) and Jane. 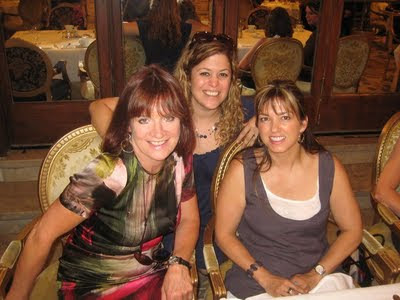 And this is me in the same hotel two days later, when I blagged my way in to use the wood-panelled washrooms and couldn't resist reclining on this completely OTT leopard-skin covered sofa..... Thanks to Sarah Morgan for taking this photo, even though she was fearful we were going to be turfed out any second! 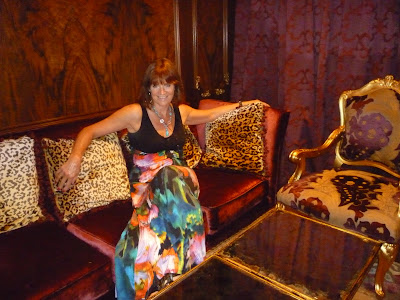 Have you been anywhere sumptuous recently?
Posted by Sharon Kendrick at 09:32 3 comments:

I've caved in and joined Twitter - mainly because I felt I was missing out on a conversation that the rest of the world was having.

So do you Tweet?
If so, please come and find me
@Sharon_Kendrick
Posted by Sharon Kendrick at 00:18 2 comments:

My first morning in New York was spent in the Metropolitan Museum of Art with other Harlequin Presents authors and our lovely editors.
(Note the misty skyscrapers in the background). 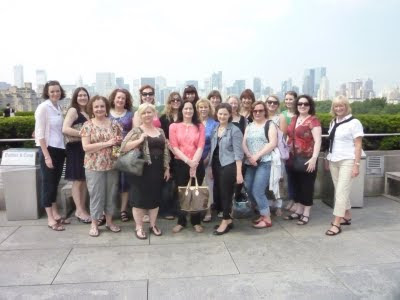 This private tour was organised by the lovely Kate Hewitt and the museum was brought to life by her sister-in-law, Anne - an art historian who magically managed to convey the sheer, impressive scale of the collection. Somehow, she made it seem both accessible and cosy - and not in the least bit daunting.
Here I am, standing in front of an exquisite pastoral stained-glass window. 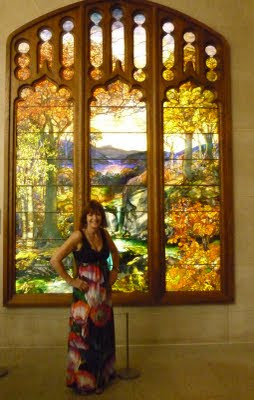 We gazed in awe at the fabulous but slightly scary work of Alexander McQueen - in an exhibition appropriately titled SAVAGE BEAUTY.
In among the carefully-crafted garments you could find glitter galore and the flutter of feathers - as well as the occasional quirky accessory such as epaulets made from alligator heads!
Afterwards, we went to Kate's apartment which is just off 5th Avenue and which made me feel like I was peeling away the outer skin of the city to take a closer look inside.
I love New York.
Do you?

THE LIFE OF A ROMANTIC NOVELIST

Just arrived back from a writers' conference in New York, where I'm pictured hamming it up in a stretch white limo!
It was fab. It was fantastic. And it was best summed up by the bus driver who said (when I started singing): "Lady, you bin hangin' around Broadway too long!".
I will post more details and more completely over-the-top photos when I've recovered - but for now I'm off to run around the water-meadows in an attempt to work off the cheese-cake! 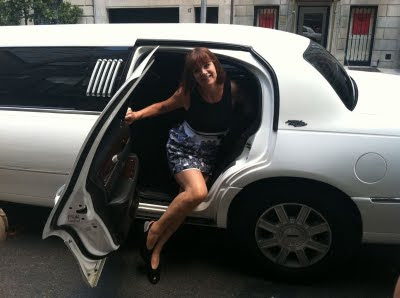 What have I missed (apart from a great Wimbledon Mens' Final...) and what has been happening in your world?
Posted by Sharon Kendrick at 11:28 7 comments: