EMUN ELLIOTT & THE LURE OF A BEARD

Still on the subject of hero inspiration - I've finally found a man who can make a beard look attractive.  No.  Forget that understatement of the century.  Who can make a beard look absolutely bloody amazing.  Emun Elliott is that man and the charismatic star of the BBC costume drama, The Paradise which I've been completely hooked by and which you can read about here.

Sadly, the programme has just finished its run but catch it if you can.  It's a superb example of gripping sexual tension and intense romance - portrayed with little more than longing looks, punctuated by kisses which seem almost chaste but are packed full of emotion. 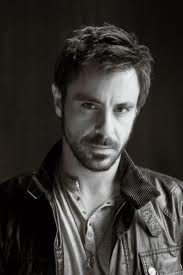 I've never written a hero with a beard before (other than the mystery beard which turned up on Titus Alexander on the UK cover of BACK IN THE HEADLINES)
But Mr Elliott has made me rethink my strategy.

Would you like to read about a man with dark, soulful eyes like his - even if he has the kind of jaw which has no real relationship with a razor?
Posted by Sharon Kendrick at 22:27