Even though I hated the recent film - I loved this window display of Alice In Wonderland, which I discovered recently while wandering around Covent Garden. 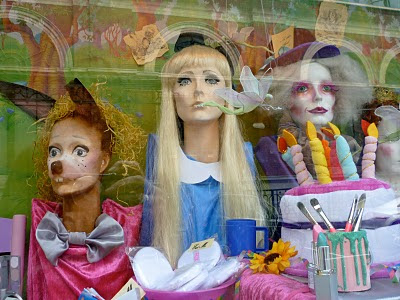 Everything in England currently feels as topsy-turvy as Wonderland - what with all the excitement being generated by our first ever LEADERS' DEBATE
One of the best things about it is watching old footage of the American equivalent. They are old hands at the sport - ever since the first live debate between Jack Kennedy and Richard Nixon, back in 1960.
But are we blinkered or open-minded when it comes to politics? I recently took this test:

And suggested friends do the same.
They were surprised at the results......
Are you?
Posted by Sharon Kendrick at 09:35