Pomegranates have always fascinated me because of their symbolism. It is said that Solomon designed his coronet based on the pomegranate's "crown" and Jewish tradition teaches that the pomegranate is a symbol for righteousness. In Greece, the fruit is traditionally smashed open on new year's day, taken as a new-home gift and used during weddings and funerals.

I've researched the fruit and it featured heavily in one of my books (THE SICILIAN'S SECRET PASSION) - but I've never seen one growing before I discovered one at the weekend, in Umbria. I felt as if I'd tumbled into a fairy-tale. 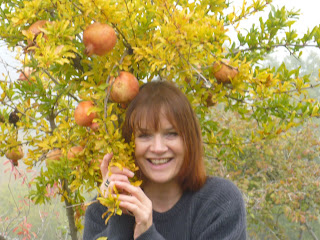 The myth of Persephone, the goddess of the Underworld, also prominently features the pomegranate. Poor woman was kidnapped by Hades and taken off to live in the underworld as his wife (there are worse things in life than being single!). Her mother went into mourning for her lost daughter and thus all green things ceased to grow.

Zeus, the highest ranking of the Greek gods, could not leave the Earth to die, so he commanded Hades to return Persephone but it was the rule of the Fates that anyone who consumed food or drink in the Underworld was doomed to spend eternity there. Persephone had no food, but horrible Hades tricked her into eating four pomegranate seeds while she was still his prisoner and so, because of this, she was condemned to spend four months in the Underworld every year.

Which is why Rossetti's painting of the luscious Persephone shows her holding an equally luscious pomegranate.

(Research is enthralling - but sometimes just a little too distracting!)
Posted by Sharon Kendrick at 07:46